Rhode Island Businessman Gets Creative in Trying to Evade Taxes

Rhode Island Businessman Gets Creative in Trying to Evade Taxes

At first claiming that he was, “Not a citizen of the United States”, and that his earnings were not taxable, Billie Schofield from Scituate, R.I., pled guilty in Federal Court to tax evasion.

Failing to file legitimate tax returns for ten years, Schofield told the court the various steps he took to avoid paying federal income taxes, including: creating and submitting fraudulent checks in the amounts of $60,000 and $49,000 to the IRS to settle back taxes; instructing a corporation in which he held a minor partnership interest not to pay him; intercepting and concealing levies from businesses that owed him compensation and repeatedly mailing false documents to the IRS.


In addition, Schofield created a false company called, Sundown Services, which allegedly was based in Alaska.

For years, he would have income payments for services rendered made payable to a bank account opened by his girlfriend in the name of Sundown Services, where she would deposit the checks..

For the years 2005 through 2009, it was determined by the IRS that Schofield’s taxes due and owing were $201,310. Income he earned in 2010 through 2016 from his business partnerships, commissions from a Canadian fishing company and proceeds from the cultivation and sale of marijuana totaled $781,481, and his income tax owing for that period was $227,435, for a combined assessment of $428,745.

Sentencing is scheduled for September, 13, 2019, where Schofield could face up to five years in prison, restitution, monetary fines and a period of supervised release.

Not All That Glitters is Gold for Jewelry Salesman

David Castle, a jewelry store owner from Albuquerque, N.M. pled guilty to tax evasion in Federal Court in May, 2019.

Castle was the owner and operator of the Gold and Silver Exchange which sold, purchased and repaired jewelry.

An indictment was handed down in Feb, 2019, which charged Castle with evading taxes from Dec. 2004 through Jan. 2018 by using several nominee businesses to conduct the company’s financial operation and hide income by opening bank accounts belonging to nominee businesses, concealing personal income and expenditures, engaging in cash transactions and failing to keep accurate business records and failing to file personal and business returns or filing false or frivolous tax returns.

As part of Castle’s plea agreement, he admitted to the charges and agreed that his conduct resulted in a loss to the IRS of $211,829.

Castle faces a maximum penalty of five years in prison, a term of supervised release, a maximum fine of $250,000 and monetary restitution.

Pedro Rodriguez, the owner of JC Mar Tax Services, in Marathon, FL, was sentenced to 60 months in prison after pleading guilty to filing fraudulent tax returns with the IRS.

For over a decade, Rodriquez filed returns for approximately 2,000 clients a year, claiming fictionalized deductions such as educational and residential energy credits. Rodriquez charged between $80 to $120 to prepare the return, which he would file electronically. The copies of the returns that Rodriguez would give to his clients was a paper return which did not show any of the fraudulent deductions.

For one client in 2016, Rodriquez claimed this client spent more than $6,000 to install solar water heating, $9,000 in mortgage deductions, $13,000 on job related expenses, a residential energy credit and itemized deductions totaling $31,293, none of which was true.

In addition to prison time, Rodriquez was sentenced to one year supervised release and ordered to pay restitution in the amount of $14,569,171!


Kae Wook Lee, the owner of a karaoke bar in Queens, NY, will spend 12 months and one day in prison for failing to collect and pay employment taxes.

It was shown that between 2011 and 2013, Lee held bank accounts in the names of shell corporations and diverted income from the bar to those accounts. Lee would then withdraw money to pay his employees in cash, without collecting, accounting for or paying over employment taxes to the IRS. It was also shown that Lee hid the cash payroll from his accountant and filed false tax returns that underreported his employee’s wages.

Lee was also ordered to pay $612,500 in restitution to the IRS and serve two years of supervised release.

Are You My Next Client of the Month?

Every month I choose a very special Client of the Month. It’s my way of acknowledging good friends and saying “thanks!” to those who support me and my business with referrals, word of mouth and repeat business.

This month’s client of the month is Toni who came to us after her divorce left her with a tax a balance she couldn’t pay after years of being a stay at home mom. We were able to work out a solution for her that makes her life easier.

You might be my next Client of the Month too! Watch for your name here in an upcoming month.

Question: I received a notice from the IRS because I did not have the funds to pay the taxes I owed on my 2017 income tax return. I also was late in filing my tax return. Not only is the IRS demanding the tax I owe, but they have slapped on these huge amounts for penalties and interest. I had extenuating circumstances that caused all of this. This isn’t fair…what can I do? 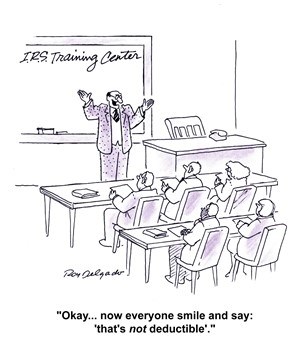 Answer: Your Tax Resolution Specialist can request a removal (abatement) of penalties 2 ways: 1) “First Time” Penalty Abatement and 2) a Reasonable Cause Argument. The IRS writes off billions of dollars in penalties each and every year, but you must know how to do it correctly.


A First Time Penalty Abatement (FTPA) can be requested if you have a “clean” compliance record, meaning you have not incurred a Failure to File or Failure to Pay penalty for the 3 years preceding the year you are requesting the first time penalty abatement on. FTBA is generally granted in most cases, regardless of what the underlying reason is, if you are eligible.

There are 9 main “Reasonable Cause” arguments to get your penalties removed. They are: 1) Death, Serious Illness or Unavoidable Absence 2) Fire, Casualty or Natural Disaster 3) Unable to Obtain Records (common issue with couples going through a divorce) 4) Mistake was made by the taxpayer or tax preparer 5) Erroneous Advice or Reliance on a tax preparer 6) Written/Oral Advice from the IRS 7) Ignorance of Tax Laws 8) Reasonable Cause/Ordinary Business Care and Prudence 9) Undue Economic Hardship.

When using a “Reasonable Cause” argument, the event that caused you to file late or prevented you from paying the tax when due must correlate to the tax years involved and supporting documentation is essential. Your Tax Resolution Specialist will guide through which documents are needed and submit a formal request in writing. For instance, let’s say you were going through a divorce and you ex-spouse withheld records from you needed to file a complete and accurate income tax return and you filed your return last because of this. You could request abatement of these penalties using one of the above reasonable cause arguments, specifically #3 above.

Under certain circumstances taxes can be included in filing bankruptcy. The rules for bankruptcy filing are determined by age of taxes owed and timely filing of the returns.

Another options may be an Offer In Compromise. An Offer In Compromise may allow the filer to pay a small amount over time to the IRS with the balance being forgiven. There are special rules to getting an offer accepted. It is best to talk to a Tax Resolution Specialist to see which option may be the best option to resolve an outstanding tax balance.

If you have an IRS issue, or just want to refer a friend, relative or client, we’d love to hear from you. We can provide a no-obligation confidential consultation to help you solve you IRS problems.

Get Your Free Tax Assessment